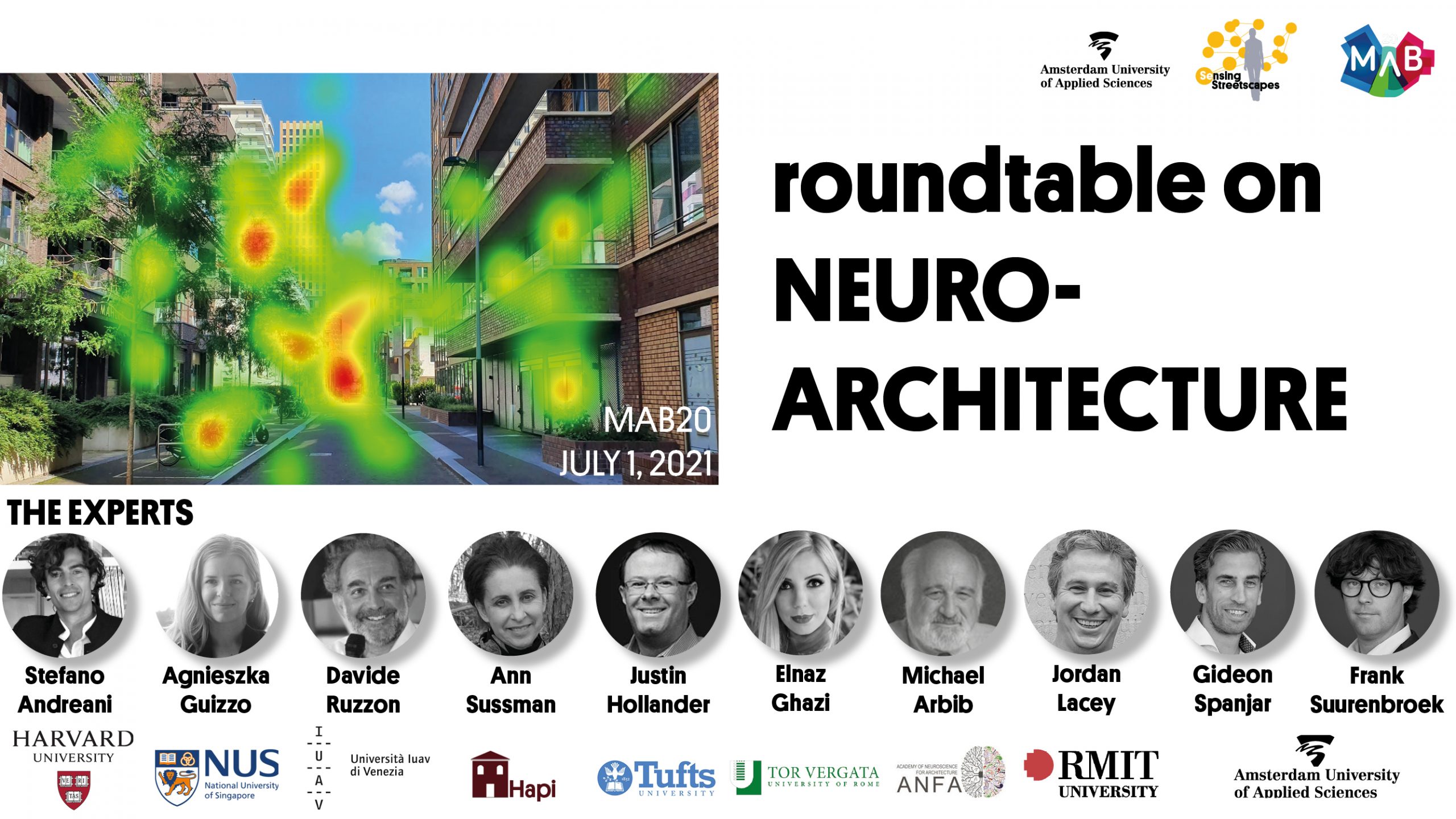 Reflection on the Roundtable Session at the Media Architecture Biennale

As the roundtable session was drawing to a close, Agnieszka Olszewska-Guizzo mentioned that urban populations are 39 percent more likely to develop depression than their rural counterparts: ‘Why is this? Maybe our brains are not yet ready for the environments that architects and urbanists built over the years.’ Ann Sussman responded with a provocative remark about the brain’s reaction to modern environments: ‘The more I do research on cognitive architecture, the more I believe that nature essentially presets what we want to experience and see. That is why I can go to Italy as a 23-year-old and immediately feel more at home in Sienna than I ever felt anywhere in the USA. This makes sense, because the architecture of Sienna externalizes the internalized architecture that our brains need to see in order to feel safe, easily move about and experience narrative coherence. We don’t have a modern brain; we have an antique brain.’

This immediately triggered a fierce response from Michael Arbib: ’If you want to design for people who won’t use elevators because they don’t have tall buildings, if you want to design for people who walk rather than using other forms of transport and if you don’t want any Zoom meetings, then go ahead and design only for the ancient brain. But no, we can’t design for ancient brains, we design for modern humans. So, the issue is: what is it about modern humans that distinguishes the city from the rural. It is not about the rural being ancient in some sense.’

This exchange formed an interesting conclusion to a roundtable session during which an overwhelming number of ideas about the relationship between neuroarchitecture and the built environment were shared by international experts in the field.

Frank Suurenbroek kicked off the session by formulating the context of the roundtable: ‘Neuroarchitecture is able to inform us, maybe for the first time ever, about the unconscious relations between the way we perceive space and the way designs are actually built. Neuroarchitecture is still a rather young discipline that transmits knowledge and technologies from the field of neuroscience into the professions of spatial design. Its goal is to get better informed design solutions, promoting human and non-human well-being in our public spaces, especially in newly built high-density urban settings.’

Gideon Spanjar then presented Sensing Streetscapes, a two-year research project focussing on the interplay between the perspectives of experts and users in the development and transformation of our built environment. In this project neuroarchitecture is considered as a combination of neuroscience, (environmental) psychology and architecture. Eye-tracker technology plays a central role, along with EEG and GSR, in recording a person’s visual experiences during their first five seconds in a ‘fresh’ urban environment. Gideon also mentioned that ‘A book about Sensing Streetscapes will be published in the spring of 2022 with a number of human-scale design principles for high-density environments.’

In the following roundtable discussion, the aim was to bring ‘the knowledge of the neurosciences to the designers’, in the words of Michael Arbib. The experts were divided into two groups, each addressing a specific theme: ‘How can neuroarchitecture contribute to specific challenges in current urban transformations?’ and ‘What are the advanced methods and biometric technologies to understand human experiences in the urban realm?’

Stefano Andreani pointed to the gap between the (academic) studies from existing environments and the tools to implement these studies in everyday (design) practice: ‘How can parameters like vision, smell and sounds be embedded in the design tools for our projects? What tools can maximise an (urban) “experience”?’

Justin Hollander talked about the deep resistance among practitioners when confronted with the potentials of neuroarchitecture. They still seem to embrace subjectivity and style. ‘What we are saying is: start with the science and let it help you to make your work more successful, make people like your work more. Pay attention to the way your building connects on a deep, emotional level with its users. Many of the sciences help us to do just that.’

Elnaz Ghazi indicated that we are in the digital age and information technology is embedded in every aspect of our lives. She mentions architects who use technology to integrate interactive facades in their buildings (Foster and Partners, and UNStudio), thus strengthening social interaction.

Michael Arbib started by responding to the Sensing Streetscapes presentation and added ‘task’ as an important aspect of researching where ‘eyes are moving to’. He suggested letting people enter a street with different tasks and investigating their eye-movements. Arbib then showed the Kampung Admiralty project in Singapore to highlight his idea that streetscapes should not be confined to streets but instead thought of as nodes or edges in the urban fabric. He wrapped up with a challenge: ‘Go from “How do you build a cognitive map of an existing environment” to “How do you build an environment that will support the cognitive maps that people need in the future”, whether this is about getting somewhere, carrying out various tasks or returning to that really important notion of building community.’

Ann Sussman explained that we are living in paradigm-shifting times where ET technology and even AI eye-tracking software are going to be available to every designer. High tech means that designers will have to learn many aspects of human evolution, for example, that vision happens in two phases, the first of which is intuitive. This is game-changing for designers.

Davide Ruzzon picked out one of the tactics his office used in an actual tender for a hospital building: a tactic for wayfinding that allows people to move intuitively to and through the building by creating 3D algocentric mental maps. Algocentric means experiencing a space from the sky, from above. This mental map is filled in by collecting data from the ground, merging a first-person perspective with a third-person perspective.

Jordan Lacey stated that sound is mostly ignored in the design of urban spaces. This needs to change, because there are many issues connected to sound: How is the city experienced by blind people? How do we experience the city at night? ‘If we start to think about the design of the city from the perspective of sound, we can start to rethink surfaces, the heights of buildings, media-based technologies. How do these aspects influence our experience of the city? As opposed to the visual field, soundscapes are all around us. New methods, like 360-degree microphones, can capture these in research projects like, for example, Sensing Streetscapes.’

Agnieszka Olszewska-Guizzo reflected on the problem of causality between design and mental health. ‘We still know too little about our brains. It is not easy to determine causality.’ How can a design decision help to improve the mental health or well-being of people? Is the effect momentary or long-term, individual or collective? For her research she uses the EEG method, but she stresses that no single method can comprehensively cover a field as complex as this: the more methods she tests, the more questions arise.

After these contributions, Frank summed up a wide variety of themes mentioned during the roundtable sessions, including scale (what are we looking at: a fragment of a street, the whole street or the whole city?); causality (are we looking for causality or for patterns?); and intuitive wayfinding (what do you design when you want people to react intuitively?). After this, he gave the floor back to the experts, initiating the abovementioned discussion about the ancient brain vs the modern human, which ended an immensely interesting and entertaining session.

Stefano Andreani, lecturer in Architecture and a Research Associate at the Graduate School of Design of Harvard University and the Project Manager of the Harvard Responsive Environments and Artifacts Lab (REAL).

Davide Ruzzon, architect and Professor of Architecture at the University of Venice (IUAV), co-founder of the master Neuroscience Applied to Architectural Design and member of the Academy of Neuro-Architecture, actively involved in the Architecture Biennale in Venice.

Justin Hollander, PhD, FAICP, Professor of Urban and Environmental Policy and Planning at Tufts University. Among others, he co-authored the groundbreaking study Cognitive Architecture (2015).

Elnaz Ghazi, PhD, lecturer (Docente a Contratto) at Master of Neuroesthetics in the department of Medicine and Surgery (Medical Systems) at Tor Vergata University of Rome in Italy.

Agnieszka Olszewska-Guizzo, President and founder of NeuroLandscape. She has a PhD in Landscape Architecture and Urban Ecology from the University of Porto (Portugal) and is a researcher at the Yong Loo Lin School of Medicine at the National University of Singapore.

Watch the Video Recording from the Roundtable Session